As a child I suffered greatly from globophobia - the fear of balloons, specifically for me the popping of them. Although I have no proof, I am certain my older brothers may have had something to do with it.

At parties, while other children would squeal with glee, I would hug the walls trying to not make contact with those volatile colourful floaty things. "Sit and Pop" used to send me into paroxysms of anxiety and I would beg to not have to play it. I never took a blown-up balloon home, ever and while other kids were rubbing balloons on their heads so they would stick to the wall with static while their hair stood hilariously on end, I was hiding in the bathroom.

Being socially paralysed at parties by globophobia didn't do anything to help make an already nerdy kid cooler.

As I grew into my teens my relief that balloons didn't feature as much at parties was palpable. They became more decorative rather than participative, rarely leaving the corners of rooms they adorned. For more than a decade I lived a normal, happy life. Then I had children of my own.

Before you get all sad presuming my babies had a childhood bereft of balloons, by the time my eldest child's first birthday rocked around, much to my surprise, I found that I no longer suffered from globophobia. I may have blown the balloons up only partially (baby steps) but there they were.

One of my greatest achievements was not passing this debilitating phobia on to my kids.

Before long I was blowing balloons up with way too much air and delighting as the kids popped them in each other's faces. Then one day it happened: my daughter, age 12, asked if she could have water balloons at her next party.

It was a hot southern hemisphere January afternoon when 15 of her closest friends descended on our house and proceeded to ignore my instructions to pop the water balloons outside only and not to traipse the resultant mud through the house.

After the party, and several hours of cleaning, I sat down at the kitchen table and noticed there were a few water balloons left over. My mind began to whirr. I had just purchased my first DSLR, had signed up for a photography degree and was keen to experiment. Could I possibly burst a full water balloon and capture the perfect moment when the water hung suspended in the air?

I had to find out!

Being new to photography I had limited gear. So limited in fact that all I had was a camera (Canon 7D) and a kit lens (15-85mm f/4) but I wasn't going to let that stop me.

My setup ended up including:

My idea was to set the camera so it fired as fast as possible. It was a bright day so I could leave my ISO quite low, maybe at 400 max. My aperture was set so I could let in as much light as possible while keeping the entire balloon in focus, therefore about F/8. My camera was set to high speed continuous shooting in the hope that one of the frames captured that most sought after image.

Then the moment of truth. I had to be able to reach the shutter button on my camera with my right hand while attempting to pop the balloon with the needle taped to the broom handle with my left. I must have looked like the Karate Kid striking a pose. That wasn't as easy as it sounds as the broom was unwieldy and aiming it with one hand was hard and I didn't want to shake the camera at all. I managed to fire off at least a couple of hundred frames of the 11 balloons over several hours.

It wasn't until the very last balloon that I managed to get the shot that I was after.

Looking back, I presume starting uni distracted me because I didn't revisit this project until earlier this year when I mentioned the above, a little drunk to the Hound over wine one evening. I must have honed the idea somewhat in my subconscious as I blurted out "I have always wanted to chuck a dart at a water balloon and capture that moment when the balloon bursts!".

Having finished my Bachelor of Photography I was now kitted up with a better camera (Canon 5D mark IV), lenses, tripods, speed lights, triggers and a bit more know-how, so how hard could it be these days?

The Hound had recently rediscovered his passion for snapping, and after that wine, where he ended up a little drunk too, he was keen to start splatting balloons with me. But first, rather cleverly, he created the perfect trigger and set up to do so reliably and repeatedly (see Balloon splatting 101).

You can see we have come a long way from my initial attempts in 2013.

One morning I awoke to find that the Hound had been up late splatting balloons into the night and had messaged me some of his attempts. That's when I imagined that they had faces, so I quickly added some emoji eyes to one of the images to see what happened. It was at that moment that SplatBuddies was born.

The Splat family continues to grow and it provides us with something to do on these long COVID-19 lockdown days and nights. They now feel like part of our family and we hope you love them as much as we do. 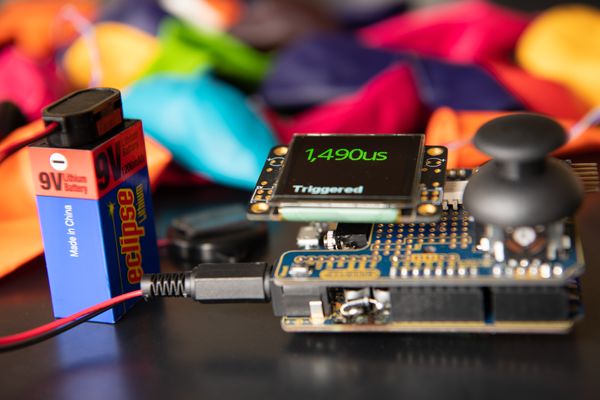 You too, can splat balloons like a pro... Build the Foxy and Hound balloon splat rig, which realised a dream of a not so little kid. 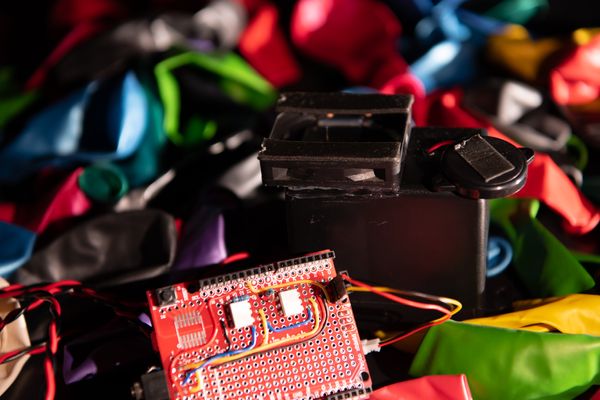 I made Foxy a present. It's a little bit terrifying, albeit on a micro scale, which makes me want to build a MUCH bigger one some day.